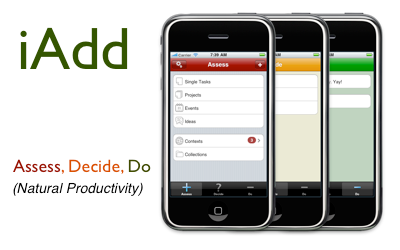 If iPhone 4 cases don’t fit older iPhone models, we can’t say the same about iPhone apps. There are probably lots of applications which are as good for iPhone 3G as for the new iPhone 4. Actually I don’t even have an iPhone yet, so I might not be the best person to discuss such issues. This was meant to be only an introduction for what I’m going to show you today: the iAdd for iPhone, an application which can help you put your daily routine in order and allow your mind focus on doing, once the planning is over.

iAdd for iPhone is based on the assumption that everything we do crosses three stages between the moment we get the idea and the moment we start working on it. One can have tons of ideas at any given time, yet not all of them will be transposed into action. That comes from an intermediary phase of “decision”, in which we decide what to do with every idea we have. If you’re interested of getting deeper into this, you can read more information here: Assess, Decide, Do. This is an article written by Dragos Roua, who is also the owner of Mirabilis Media NZ, the company which is behind iAdd for iPhone.

Briefly, the application is a smarter “to do” list, because it lets you split your list in three. The first part is the assessment zone, where you input tasks, ideas, anything you want to get organized.  You can even add ideas that result from a brainstorming process, for further consideration. The second part is the Decision zone, where you transfer those things you want to focus your attention on in the close future. The Do part will host those things you’ve decided to do.

What I didn’t manage to find out is whether or not iAdd works with the iPad as well. It seems it’s not compatible yet and I don’t know if the author intends to release an iPad version.

The application is $2.39 and you can get it from the iTunes App Store. It seems that this is the introductory price, so you’d better get it now, while it’s in incipient development stage, if you think you could use it.

Last, the answer to the question I can already hear in my mind: “would you buy it?”: if I were still living a lists-driven life, yes, I’d have bought it, because I think it’s useful to get everything sorted out once, then just get notified of tasks as you need to get them done. Having everything in the cell phone is great, because that’s not so easy to lose, I guess, and because you have it with you almost at all times (I once met somebody who took his mobile phone with him even in the bathroom).